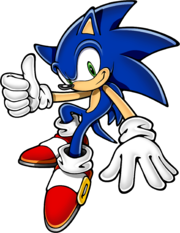 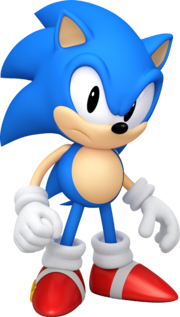 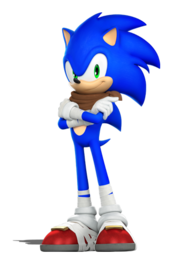 Sonic the Hedgehog (ソニック・ザ・ヘッジホッグ Sonikku za Hejjihoggu), trademarked Sonic The Hedgehog,[1] is a video game character and the hero of the video game series released by Sega, as well as numerous spin-off comics, cartoons and books.

The first game in the franchise was released on June 23, 1991 in order to provide Sega with a mascot to rival Nintendo's flagship character Mario.[2][3] Since then, Sonic has become one of the world's best-known video game characters, with his series having sold millions of copies.[4] In 2005, Sonic was one of the first game character inductees into the Walk of Game, alongside Mario and Link.[5]

Artist Naoto Ōshima, designer Hirokazu Yasuhara and programmer Yuji Naka are generally credited with the creation of the character,[6] a blue anthropomorphic hedgehog, who has the ability to run faster than the speed of sound[7]. This is a major part of the gameplay of the series.