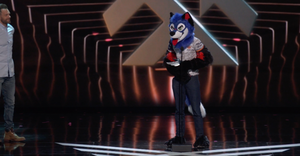 SonicFox5000 (Real name Dominique McLean; born March 2, 1998),[1] often shortened as EF|SonicFox, is a professional video game player who lives in the United States.[1] Their[2] fursona is a blue fox.

SonicFox first got fame by winning EVO's[3] Mortal Kombat and Injustice: Gods Among Us tournaments in 2014. They, since then, never got defeated and remained to be the world best Mortal Kombat player since then, also ranking first in 2015 and 2016.[4]

On December 7, 2018, SonicFox won the award for Best Esports Player at the 2018 Game Awards in Los Angeles after winning against four other nominees. They were also nominated in the Best eSports Moment category for their decision to switch play-sides against their rival Goichi "GO1" Kishida during the Dragon Ball FighterZ finals during 2018's Evolution Championship Series fighting game tournament in Las Vegas. [6]

They always attend tournaments by wearing a blue fox tail and a hat with blue fox ears. Their eSports team is referred to as "Echo Fox" since 2017. It used to be referred to as "Critical Reaction".

On June 8, 2021, the chess website Chess.com announced that SonicFox is a participant for their chess tournament Tournament Arc 2, featuring YouTubers from the Anime community as well as Fighting Games players, taking place from July 16 to 18 and 22 to 25. [7]