Somewhere Within the Shadows 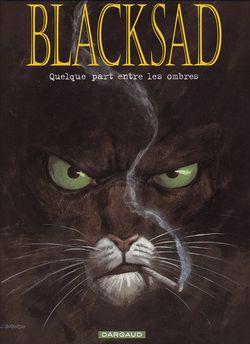 Somewhere Within the Shadows (French Quelque part entre les ombres), is the first graphic novel of the Blacksad series, published in 2000 for the French market by Dargaud. In the United States, the book was simply retitled Blacksad by now-defunct publisher iBooks in 2003.

John Blacksad, PI, is called as a witness to a crime scene by Smirnov, a police commissioner, who investigates the murder of the famous actress Natalia Willford, who John used to be involved with - first as a private investigator, then in a more intimate capacity when he managed to find and "convince" her stalker to lay off her case.

His first inquiries with a friend of his, Jake Ostiombe, a boxer gorilla Blacksad had probably introduced to Natalia as a bodyguard, led him to Léon Kronski, a screenwriter and one of her last known lover. Investigating Léon's apartment, Blacksad finds out that Natalia's lover had left in a hurry; leaving no past address - except for some matches bearing the "Cypher's Club" log. Said club as not to Natalia's usual standing, leading Blacksad to deduce that if she came here, it was because she was hiding from someone else - tracking Léon Kronski down was now a matter of ensuring his safety too. While at the club, one of the customers accepts to lead him to Léon... In a cemetery.

Blacksad finds Kronski already dead and buried under a pseudonym; only someone powerful could have had someone erased silently without a trace, which confirms Blacksad's suspicions that whoever killed Natalia navigates the higher spheres of power. Two hired thugs beat him up there as a warning, then he spends the night in a police station cell. Smirnov explains to Blacksad that because of "pressure upstairs" he himself cannot investigate the matter any further. Smirnov offers him a deal, advantageous to both sides : Blacksad investigates and solves the case, and Smirnov will cover for him.

As Blacksad returns home, a iguana hitman erroneously thinks that Blacksad wants to blackmail his employer about Léon's murder - something he wanted to do himself, as he owns the gun used to kill Natalia. He can't go much further than that, as a rat goon shoots him; seizing the opportunity, Blacksad grabs the fallen iguana's gun and kills the rat. The iguana dies giving his employer's name and thus Blacksad finally uncovers the culprit of the whole affair: Ivo Statoc, a toad, the richest and most powerful businessman of the city, who considers himself above any law. Statoc shot the actress himself because of her libertinism. After infiltrating the office suite at the top of his skyscraper (and getting some revenge on the hired goons that had beaten him up in the cemetery), Blacksad confronts the completely calm and cold-blooded Statoc - who first offers him a job, and later a bribe. Blacksad rejects both offers as a matter of principle. Ivo Statoc, arrogantly sure that due to those same principles Blacksad woudldn't dare shoot him, taunts an increasingly irate Blacksad - and gets shot in the head with the same gun he had used to kill Natalia. Blacksad recovers then, arranges the crime scene to look like a suicide, and then goes to meet Smirnov who fabricates an alibi for him. The two men separate, visibly unhappy about this resolution that goes against both their consciences : that's the problem with having one to begin with.