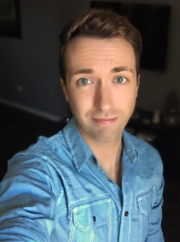 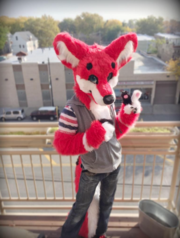 Soda in his fursuit 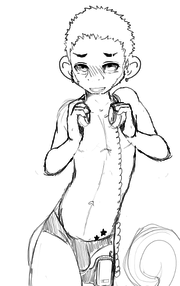 One of Soda previous fursonas, Paolo

Soda a former licensed educator in Georgia and Illinois, but now he works as an IT network/systems administrator.[1]. His interests include surfing and linguistics. Soda is polyamorous and lives with his non-furry husband.[2]

Soda used to code for various furry MUDs in the late nineties including FurryMUSH.[citation needed] He attributes his initial interest in the fandom to the art of artists Fel, Greenmonkey, and Fennec,[3] as well as furry-themed MUDs.

He expressed interest in creating an online furry art circle, and even try to do so briefly with fellow furry artists Narffet, INoby, Keglunek, and coder BearPatrol under the domain name EatGlitter.com in 2009.[citation needed] However, a lack of free time kept him from maintaining the webspace, and the project was postponed indefinitely.[citation needed] Soda has since said that he:

Soda's fursona is a bright red Cherry Soda-themed fox (a Sodapup),[5] with white and black markings.

His former fursona was a primate named Paolo.

Soda has gone under various artist pseudonyms while in the fandom since the late nineties including Miles Feral (an otter) on VLC, and Yves-Alphonse (a blue lemur) on Fur Affinity. His works have been largely homoerotic in nature.

He began taking commissions after he created a Fur Affinity account as Paolo in 2008. He accredits his own artistic style to inspiration from Japanese comic books, primarily the genre shotacon. His preferred art tools include Photoshop, SAI, and Wacom Intuos tablets.