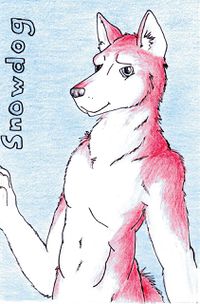 Snowdog (born on the 15th March 1989) is a Red Siberian husky who lives in Hampshire, United Kingdom. He first joined the fandom around 2005, after being introduced into the UK Fur forums by Fallowbuck, a good friend of his, that he met in college. He is a member and was a co-organizer of the Basingstoke furmeets[1].

Snowdog's fursona is fully anthropomorphic with traditional husky coloured blue/green eyes and plantigrade legs with padded paws at the end of them. His fur colour is red all over apart from his chest, lower areas and inner thighs which remain as white as the underside of his traditionally sickle-shaped tail.