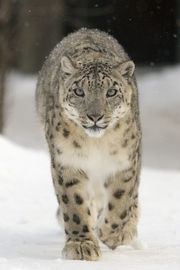 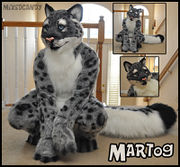 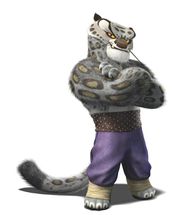 The snow leopards (Panthera uncia), sometimes referred to as "sneps", are a variety of big cat found in mountainous regions of central Asia, ranging from Russia and Mongolia through China and Tibet and reaching into the Himalayan regions of Afghanistan, Pakistan and India. Another name for the snow leopard is the Ounce.

The snow leopard was formerly the sole member of the genus Uncia. However, because of later phylogenetic studies it was placed into the Panthera genus, which also contains species such as the tiger, its closest living relative. Its inability to give a deep and powerful roar (due to an under-development of the fibro-elastic tissue that forms parts of the vocal apparatus) sets it apart from others in the big cat group.

Although having a similar rosette pattern to the leopard, they are less defined and are spaced further apart. The fur is long and wooly (fur length being between 1.5 - 2 inches = 4 - 5 cm in length), protecting the animal from the extreme cold of their mountainous habitat. They are generally grey with brown/yellow tinges on their flanks and have an almost white colouration on its underside. They have small ears mounted on a small head, with a distinctively heavy brow, holding enlarged frontal sinuses, an adaptation to very cold air. Body size can be up to 1.3 metres in length, and they can weigh up to 70kgs. Their trademark tail can measure as much as 90cm and assists in balancing the cat. The limbs are relatively short and stocky, ending in large, sturdy paws.

The snow leopard stalks its prey in a similar fashion to the leopard, yet strangles it like a cheetah. Prey includes animals such as Marco Polo Sheep, Wild Goats, Ibex, Siberian Tahr, Blue Sheep, Marmots, and Picas.

Snow leopards are active during the day and more active around dawn and dusk (crepuscular behaviour). There is very little known about the snow leopard's lifestyle. These secretive animals often meet to hunt and play.

The gestation period is 14-15 weeks, with 1-5 cubs being born from April to June. The same den site is used year after year by the female snow leopard. The cubs open their eyes at 9 days, and are weaned at 2 months. They generally stay with their mothers for 18 months.

Territory of 138-1,500 km² is held by males. Male and female ranges overlap, and pairs have been observed hunting together. Though usually considered solitary, they have long-lasting partnerships that follow a long courtship.

There are approximately 4000-7000 snow leopards left in the wild, and they are hunted for fur and body parts; they are also killed by eating poisoned prey. They are protected in Russia and India, but hunting is still legal in Mongolia.