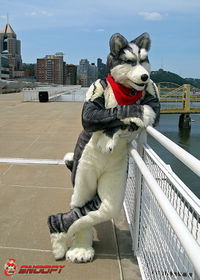 Snoopy-pup, also known as Snoopy, Sub-Woofer and RubberPuppyDog (born 8 February 8,[1] 1963 in Montreal, Quebec, Canada),[2] is a fursuiter who lives in Toronto, Ontario.

Snoopy-pup has been known as Snoopy since the early 1980s. Although he's had the desire and feelings to be a human-puppy-dog since early in life, he received his dog name when a friend nicknamed him 'Snoopy', after the Peanuts comic strip character.

Snoopy-pup's fursona, Snoopy, is a Siberian Husky. He stands at 5 feet 5 inches (1.65meters), has white and grey fur, steel blue eyes, and distinctive shoulder and back markings. Snoopy-pup is occasionally seen wearing a red bandanna and red collar with pet tags around his neck.

Snoopy-pup's fursuit first debuted at Midwest FurFest in Rosemont, Illinois in 2010.[citation needed] His fursuit was made by Noble Wolf Productions.