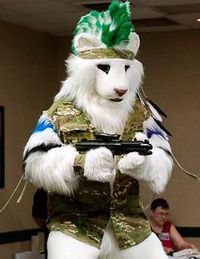 Snap E. has attended several conventions dating back to Midwest FurFest 2000. He has been a panelist and con staff for several conventions including AnthroCon, Further Confusion, Midwest FurFest, and Rocket City FurMeet where he was on the board of directors and treasurer for the con. His most recent involvement is as registration staff for MFF and registration lead for Furry Migration. He has also attended Gaylaxicon, Cat Days, Biggest Little Fur Con, Furry Connection North, OSFEST, Anime Nebraskon, Contagion, and Rocky Mountain Fur Con, among others.