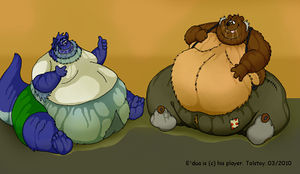 An example of slob characters drawn by Tolstoy.

Slob is a combination of several paraphilias that have been combined together into a single fetish. Slob characters are typically depicted as being unrealistically fat, are usually sweaty and unwashed, and are often extremely gassy. A liking for vore is common amongst most slobs, as it emphasises the character's immense gluttony.

Slob furs are rarely involved in all fetishes available under the "slob" umbrella. The list of paraphilias involved as part of slob are not well defined, but can include: