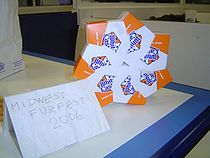 SliderCon is not exclusive to the LAFF group. There is always one held during Midwest Furfest and everyone, even non-LAFFurs, is welcome to attend.

SliderCon started in March of 2005 when the Denny's that the LAFF Group would usually go to after bowling told them they would have to wait two hours just to get a table. Sema decided that she didn't want to wait and went to White Castle instead.

In the following months, SliderCon gained popularity as the "After Bowling Event" and on average has 15-35 attendees. In April 2007, SliderCon celebrated its two year anniversary, making it the longest running after-bowling event. The anniversary is celebrated in April and not March because no SliderCon took place in September 2005.

In May of 2007, Sema made the announcement that she would be moving to Arizona and would no longer be running the after bowling event. She then announced that she would be handing over the event to her good friend, Blazger, because she knew he could "keep the event going".

In late December of 2006, Sema decided to recreate SliderCon on Second Life. Being the founder of both SliderCon and the Second Life LAFF group, she decided that this place would be LAFF's official Second Life headquarters.

The Second Life's SliderCon currently sits on a 1024sm plot of land in the sim of Osondoson and doubles as Sema's Second Life home. The castle is still under construction, but in the future, users will be able to buy bags of Slyders, Crave Cases and Crave Crates. 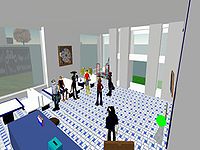