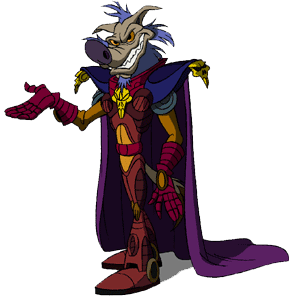 Sleet (Louvois in the French version) is is a wolf character and one of the main antagonists from the French/North-American animated series Sonic Underground.

Sleet is an anthropomorphic gray wolf with light blue fur, wearing a red and yellow body armor and a long purple cape. He is very smart, and a ruthless and greedy vilain.

He has a wide knowledge allowing him to think up of many genious plans to catch his preys, and is a trained pilot as he is seen piloting many different kind of vehicules such as trucks and aircrafts, and also how to use any kind of weapon.

He also owns a remote allowing him to turn his partner Dingo into any living item that can be handy to him.

Sleet is a bounty hunter hired by Doctor Robotnik to catch Sonic, Manic and Sonia. While all of his plans are genuine and is seen as a real threat by the main characters, he constantly fails due to Dingo's stupidity.

As the Sonic Underground series is an independent universe[clarify] from the Sonic the Hedgehog franchise, he never appeared in any other Sonic-related media.