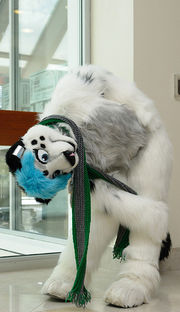 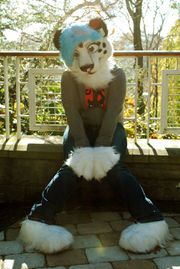 Skye Frostpaw moved to central New York to live with her mate Angus Shire for a year before returning to Ohio once more and trying to finish her degree in Psychology. Skye and Angus married on March 27, 2013. Angus is currently active duty for the United States Army, making Skye an army wife.

Skye Frostpaw's name was actually created at random, there is no real meaning behind the name other than the fact that it's a more usual name. Her fur is actually white because of the lack of grey colored pencils during her creation.

Skye Frostpaw's fursona is a female snow leopard, with white fur and a grey belly. Her tail is her pride and joy and is often used as a pillow.

They only lived roughly twenty minutes away from each other and soon grew very close, almost inseparable. During a gaming meet, Skye and Eleete came up with the last name Frostpaw together.

Skye Frostpaw's current fursuit was created in December 2008 by Media Skunk,[3] and delivered in April 2009. The suit is a full suit made of Monterey Mills' White Fox Fur with an airbrushed grey belly. Her tail is removable, making it possible to wear as a partial suit. The rosettes on Skye's suit are hand sewn and only cover her thighs and shoulders.

Skye suffers from Crohn's disease, which limits her fursuit time.

Aside from attending conventions and drawing furry art. Skye is a percussionist and loves listening to marching bands. She was head snare in her high school marching band and even went on to play cymbals for Bowling Green State University's Falcon Marching Band in 2007.

During her high school years, Skye was actually an avid member of her 4-H club and bred rabbits to show and sell. She specialized in Netherland Dwarves and French Lops. (It is said that her French Lop 'character', Sugar, is based off of her first rabbit. Which was a French Lop named Sugar).