This is an article about the species. For topics that share the name, see Skunk (disambiguation) 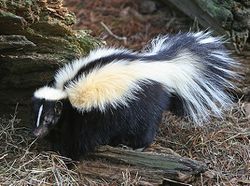 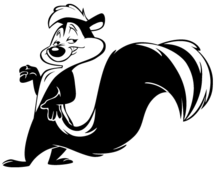 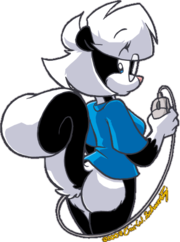 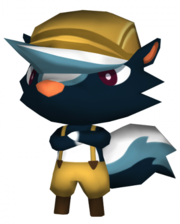 Skunks are mammals of the family Mephitidae. In the fandom, skunks are also sometimes considered to be mustelids. Zorillas and Polecats are sometimes grouped with skunks.

Skunks live primarially in the borders of the United States, although some can be found as far north as Canada and as far south as South America. Different species are omnivores, insectivores, and scavengers in varying proportions.

There are numerous species of Skunk, including:

In the fandom, they are viewed with higher regard than in society as a whole. Skunks are often considered to be playful and affectionate, as is true for real life; some even make it to sex symbol. Sabrina Online is a well-known webcomic with such a skunk main character. Another skunk of furry popularity is the Warner Brothers cartoon skunk Pepé Le Pew. Pepe's infamous amorous adventures have gained him the status of a furry sex symbol, inspiring numerous yiff art featuring himself and/or his younger female counterpart Fifi La Fume.

Female skunks are sometimes referred to as "skunkettes" which is seen as an affectionate name for female skunks.