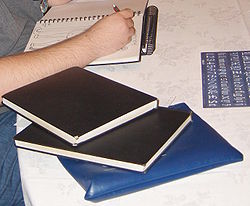 Sketchbooks in the Zoo at Anthrocon 2006 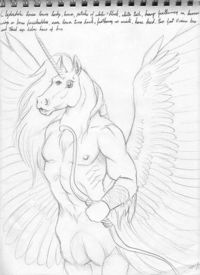 Example of a furry drawing on a sketchbook, with commissioner's notes on top to assist artist (art by Dustmeat).

A sketchbook is a book, art pad, or tablet computer with blank pages or storage for sketching, frequently used by artists for drawing or painting as a part of a creative process, or by fans to acquire and collect media from third parties, such as comic book artists.

Many furry fans (and some furry artists) keep sketchbooks for trading, sharing, and selling (commission) anthro or furry sketches with artists who delve in the theme. This process normally occurs at conventions, but it can be done at furmeets or informal social gatherings. Some artists may also be willing to take sketchbooks home and mail them back upon completion, and it is typical for the custodian of the sketchbook to cover the cost of postage.

Compensation is usually the norm, be it for possibly consideration in the form of money, food, con lodging, or other goods or services. Free sketches may be also drawn as thanks, gifts, or trade.

Often, sketchbooks have a theme, to give the contributing artists some ideas for what to draw.

During the mid/late 1990s, Richard Chandler wrote what was considered the staple of proper conduct regarding furry fandom and sketchbooks.[1] Its use and reference has fallen in disuse, and the guide has not been updated since 2002.[2]