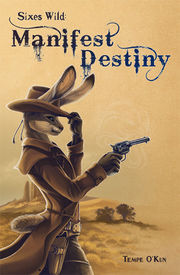 Sixes Wild: Manifest Destiny by Tempe O'Kun was published in June, 2011 and is available from Sofawolf, FurPlanet, and Rabbit Valley.

Sixes Wild is an erotic, western-romance about a fruit bat and sheriff named Jordan Blake who forms a romantic relationship with a hare named Six Shooter, a thief who crossdresses as a male. The two are very different: Blake is a well-educated sheriff from a family of lawyers with a strict set of principles and does his job by the book whereas Six is a thief and an outlaw who drifts from town to town, carrying with her only two revolvers and her own sense of morality. Together, they must uncover a mystery Six’s father has left behind whilst also defending themselves against the rich and greedy lion Tanner Hayes, who serves as the main antagonist, and his gang of gunslingers. The point of view switches between these three characters from chapter to chapter and the book is written in first person perspective. One of the chapters is also narrated by the Japanese tigress Mei Xiu. Other characters include Blake’s loyal deputy bloodhound Harding and the fox Doc Richards who is the local physician.

The plot is set against the backdrop of the post-Civil War frontier. The dialogues are written with western-themed sentence structure and expressions in accordance to the setting. The story was first introduced in the form of several chapters on his Fur Affinity account and was later rewritten and published as a book with cover and interior illustrations by ShinigamiGirl. The icons identifying the point of view for each chapter were drawn by Yuki.

Sixes Wild: Manifest Destiny was generally well reviewed. A writer for Flayrah.com wrote that the action and mystery will please morph fans but added that the narrative switching between the main characters was “mildly annoying until the reader figures out who is talking”, and gave the book four out of five stars.[1] The Western Writers of America’s Roundup magazine also gave it a positive review.[2]