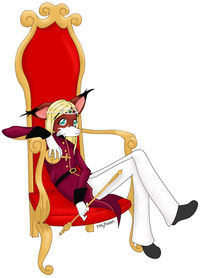 Prince Sixam on a throne

As of 2017, Sixam is on the Registration staff for Furry Fiesta and Furry Siesta. He is also Lead Staff for the Alamo City Furry Invasion furry convention in San Antonio, overseeing the gaming rooms.