This article is about the movie character. For other uses, see Simba. 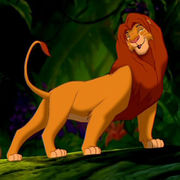 Simba is the son of Mufasa and Sarabi, the monarchs of the pridelands at the beginning of The Lion King.

As a child, Simba was a somewhat reckless, naive, optimistic, and very enthusiastic prince. He boasted frequently about being "future king" as opposed to merely a prince, and, perhaps unintentionally, pestered his jealous uncle Scar.

His best friend was Nala, who would often get in trouble with him, especially when they decided to ditch Zazu, who was watching them at the time, and explore the Elephant Graveyard which Scar told Simba about, knowing he would want to go there to test his bravery.

Simba as a cub

The Elephant Graveyard later became known as the Outlands after the dark lions were banished there in the second movie.

At the time, the Elephant graveyard was home to thousands of hyenas, and three of them, Banzai, Shenzi, and Ed, were expecting the cubs. By now, Zazu had caught up with the kids, and the hyenas decided to send him off via a steam vent. Zazu reported the incident to Mufasa, who promptly chased off the hyenas.

Scar then decided to bump off both Mufasa and Simba, this time through a wildebeest stampede. Once again, he set up Simba and the hyenas, and signalled for the hyenas to initiate the stampede. Mufasa was again informed of the danger of his child, and while rescuing Simba, got himself into a fatal situation. While trying to get Scar to help him, Scar punctured his claws into those of Mufasa's, and then released him. Mufasa fell into the stampede and was crushed, and Scar told the traumatised cub that Mufasa's death was his fault and that he should run away. Scar then set the hyenas after him.

Simba escaped the hyenas, was then assumed dead by all, including the hyenas, and ran across the desert until he was taken in by Timon and Pumbaa. Simba adopted a nihilistic philosophy, and lived in isolated bliss with his new-found friends.

Finally, the turning point came in Simba's life when he met up again with Nala, while trying to chase her off from killing Pumbaa. Simba was told of what was going on back home under Scar's rule, but due to his "Hakuna Matata" philosophy, he refused to return, although he would be king. He finally got into a bitter argument with her and offended, he left to be alone in the grassland at night.

Rafiki, who had found out that he was alive, found Simba and decided to annoy him, possibly delirious from joy, and when Simba asked him who he was, countered the question with "The question is, Who are you?" Simba admitted to not being so sure anymore, Rafiki took this as a perfect opportunity to make Simba take responsibility for what was rightfully his kingdom. He was escorted to a small pool and told that his father lived in him.

Mufasa then appeared, as a ghost in the sky, to command Simba to take responsibility and left him shortly afterwards, leaving Simba to make up his mind. Simba then returned to the Pridelands.

Upon return, he found out that a drought had occurred, and regardless, Scar refused to let the pride leave. What's more, the hyenas, the natural enemy of the lion, had taken over. Simba finally found Scar abusing his mother. Enraged, Simba revealed himself and was unrecognized by his family, who believed him to be Mufasa coming back for revenge.

Scar realized that Simba was in fact alive, and then decided to tell the pride that Simba was the one responsible for Mufasa's death. A thunderstorm began, and Scar had Simba dangling from the jutting edge of Pride Rock. Like he had killed Mufasa, Scar dug his claws into Simba's, and finally revealed that he was the killer. Further enraged, Simba jumped back up and engaged in battle, finally throwing Scar off the edge. Scar was then consumed by the hyenas he had just betrayed when trying to pin Mufasa's death on them after admitting it to Simba.

Simba then became king and had a daughter, Kiara, with Nala. (For discussion on some of the non-canonical identities of the cub, see the section entitled Who was the cub? in the article on Kiara.)

Simba banished the dark lions (who became known as Outsiders) to the Elephant Graveyard for supporting Scar. The hyenas ran off, probably due to lack of support.

Due to his paranoia of losing Kiara, Simba became uptight and overprotective. One day, in her early childhood, Kiara had gone off to the Outlands and Simba had to go rescue her, where he met Scar's mate and follower Zira, who taunted Simba with the implication of the death of another cub. Simba merely took his daughter and left, and he didn't meet up with Zira again until some years later.

When Kiara became a young adult, Simba reluctantly allowed her to go on a hunt alone. Up until then, he would always send out Timon and Pumbaa to watch her, which he did again while Kiara was hunting.

After Nuka and Vitani had set the grassland on fire and their brother Kovu began his staged rescue, Simba noticed that Kiara was in danger and went off to get her, meeting Kovu, who had been trained to assassinate him. Reserving judgment of Kovu, Simba allowed him to follow him home.

After finally gaining enough trust for Kovu to take a personal walk with him, Simba was ambushed by the Outsiders. Assuming Kovu had set it up, Simba regained his hatred towards dark lions and banished Kovu.

The death of Nuka, who had been crushed by a log Simba had kicked on him, stirred up enough hatred from the Outsiders for a war to break out. Kiara had run away to find Kovu, whilst the Outsiders were now in the vicinity of Pride Rock, and coming for him. During the climax of the war, Kiara and Kovu returned, and convinced Simba to let go of his hatred for the Outsiders, Zira, however, didn't fare too well. Simba joined forces with the Outsiders, and allowed Kovu to become his heir.

The character was voiced by many different people in the English version of the movie.