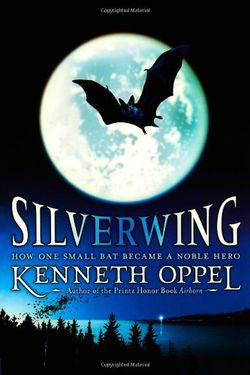 The Silverwing book series by Kenneth Oppel featuring the adventures of Shade, a young bat.

When Shade Silverwing breaks an age-old law, looking at the sun, the owls burn down his beloved Tree Haven. They go to Hibernaculum where they rest for the winter. Along the way, he meets Marina Brightwing who helps him throughout the series. They also meet other characters like Goth and Throbb, bats who are part of the Vampyrum Spectrum, Zephyr, a bat that can see past, present and future, and Scirocco, a bat who wants to be Human.

A place where newborn bats are raised by their mothers during the spring and summer. The tree haven in Silverwing is burned to the ground by owls. Later on, a new tree is hollowed out, and becomes the new Tree Haven. This is where Griffin lives, and the creation of it can be read about at the end of Sunwing

A place where the male bats roost during the spring and summer.

A place behind a waterfall where Shade's colony goes to hibernate during the winter.

A rain forest, most likely in Central America. Home to the Vampyrum Spectrum bats and the Pyramid. It's also hosts creatures including large insects, southern owls and other exotic things that northern bats haven't seen.

A statue of Jesus Christ that overlooks Rio de Janeiro. The survivors of the explosions from the metal disks use this as a safe haven from the Vampyrum.

Home to the royal order of Vampyrum, Goth's home. It's filled with millions of Vampyrum. It was destroyed when Voxzaco dropped an explosive on it, killing all the Vampyrum. Shade's family and friends escaped, although some did not, and Shade got half of his fur burnt off.

A place created by Cama Zotz for his Vampyrum Spectrum. It is beneath the earth and is mostly made up of pictures that occur in bats' minds as a result of conflicting sonal vibration, giving the appearance of images. All bats that die end up there. It is possible, but rare, for a living thing to enter the Underworld; where the denizens will notice a "glow" about them.

At the place where Zotz fought and killed his counterpart Nocturna, a great Tree made seemingly of fire grows. Entering it, the bats become as Nocturna has become; an observing intelligence in the natural world.

The great war between the birds and the beasts happened approximately 65 million years before the story. The bats, seeing themselves as being both, but neither, refrained from fighting. At the end of the war, the two warring factions banished the bats. They could not see the sun again because they refrained.

War to bring back the sun[edit]

A war between the owls and the bats fought 15 years before the Silverwing book. The bats lost. Later, Shade Silverwing and Owl Prince Orestes called for a truce, under which bats were given freedom to move under sunlight for as long as they caused no trouble.

The war that divided all creatures from each other.