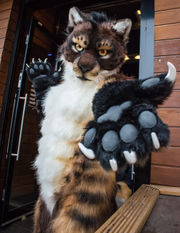 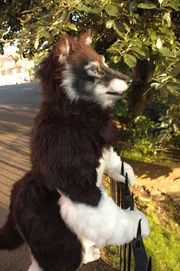 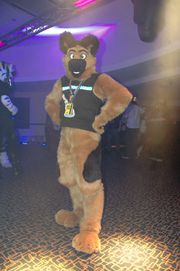 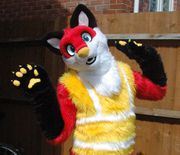 Silverfoxwolf has been around the furry world since 1995 and became much more active around 2001. More recently though he has been using a shortened name Silver. He is a fur from London, England. His fursona is a large anthromorpic wolf, often referred to as a werewolf.

Silver is an enthusiastic staffer and volunteer at multiple events and conventions in the UK and Europe. He attended Confuzzled in 2009, 2010, and 2011 as a volunteer and joined the staff in 2012 as a Con Ops assistant before becoming the Head of Medical and GSD Cutlass running the convention transport. Having joined Scotiacon as the Head of Events he subsequently became the convention chair. In October 2012 Silver was made the medic for NordicFuzzCon, subsequently moving to main stage AV completing his last year there in 2018. He has also previously been part of the security team and first aider for Frantic Eufuria.

Silver often attends the LondonFurs meets as well as various meets in the Midlands and North.

At conventions and events Silver has become known for playing cheese music. This is normally based on music from the 80's, 90's and songs from other eras that are bouncy in nature. Particularly suited to playing Dead Dog parties at the end of many conventions the music style choice is designed to help attendees finish the convention on a high note. Silver has taken to using the name Captain Cheese and artwork has been produced to support the name.

Silver owns two partial fursuits both of Collin the Collie the first one debuted at ConFuzzled 2011. The second version of Collin was completed in 2017. In addition seven full suits:

Collin (both versions), Sgt. Growler, and Safetyfox were made by Made By Mercury. Silverfoxwolf was made by Qarrezel of Clockwork Creature Studio. Kahn was made by Faruku. Monza was made in parts (head - Otter.n.daughter, bodysuit by Faruku and paws by Taya) and bought from Faruku in early 2018. Radinov was built by Mixedcandy and was bought in 2018. Henke was made by Beetlecat.

Outside of furry, Silver works for a large London bus company repairing and maintaining vehicle electrical systems. He has also volunteered with St. John Ambulance as a patient transport attendant which is partly how he came to be involved in furry events owing for the need to provide at event support. For five years he also volunteered as a special constable with the Metropolitan Police progressing to become a special sergeant. However he left the police due to increasing pressure for specials to become regular officers and to concentrate more on other volunteering activities.

Silver practices amateur photography and has developed an interest in photographing architecture and landscapes. One of his most enjoyed hobbies is travelling around Europe, particularly flying and using local train services to access more places without a car.