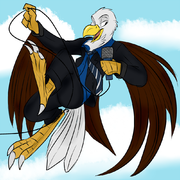 Silver Eagle is a web developer and member of the Brony and Furry communities. In the Brony community, he built and directed the Ponyville Live media network from early 2013 to late 2015. He briefly worked with Fur Affinity in late 2015 and early 2016, and his departure and subsequent launch of the short-lived site FurryDigital sparked controversy.

Silver Eagle has most often been seen in pony form, as a bright silver pony with striped yellow and white hair. As a furry, he opts to keep the "eagle" theme, taking the form of a North American bald eagle in a black and blue suit. He is often seen holding a microphone or wearing headphones, as a nod to his time in fandom media as an announcer and host.

From February 2013 to December 2015, Silver Eagle served as the webmaster and director of the Ponyville Live! (or "PVL") media network. PVL is a confederacy of independent radio stations and podcasts that work together to share common services (mobile and web apps, APIs, playback data, statistics, web hosting, etc) and provide coverage of Brony conventions.

PVL's first covered convention was the ill-fated "Las Pegasus Unicon" in late February 2013. The network would go on to offer free convention coverage of dozens of MLP conventions in the three years that it invested heavily in convention coverage. As a result of Silver Eagle's dwindling funds, he announced in October 2015 that PVL's last North American convention would be Nightmare Nights Dallas 2015, later in the same month.

At the end of 2015, Silver Eagle announced that he intended to shut down Ponyville Live's parent company, Bravely Blue Media, and possibly the PVL web site as well, citing financial troubles and mental health issues. The Poniverse network, who had previously worked alongside PVL in some projects, offered to provide continued hosting of the Ponyville Live web site and stations. Silver Eagle agreed to this arrangement, and later in the month stepped down from his position as network director, retaining an "emeritus" position as a site administrator and developer.

After the FurAffinity controversy (see below), Silver Eagle shifted focus back to Ponyville Live to continue active development on the project. The project's new hosts, Poniverse, informed him that he was not welcome to return in any capacity, even as the previously agreed-upon administrator/developer role. Citing this as a violation of the terms of his transfer of PVL to Poniverse, he considered the agreement invalid and opted instead to decommission the network's online presence (which was, at this point, still hosted on his servers). Although no servers owned by any third party were accessed, Poniverse described the events as "hacking", spun up their own copy of the Ponyville Live infrastructure and seized full ownership of the network, using Silver Eagle's negative response as justification to sweepingly ban him from the Poniverse network and remove the footer note giving him credit for building the PVL web site. This credit would only be reassigned months later, on April 23, 2016.

Poniverse continues to maintain Ponyville Live under their own servers, maintaining the project's open-source codebase on their own GitHub repository.

Silver Eagle would later repurpose some of his own open-source code from Ponyville Live into a non-fandom-associated, standalone web radio management tool called AzuraCast. He continues to actively maintain AzuraCast.

Silver Eagle began working with Fur Affinity in October 2015, after approaching site owner Dragoneer and discussing the site's needs for web development. As a member of the brony fandom, he was unaware of previous issues with FA's development and knew only that the site "needed help". Dragoneer added him to FA's tech team.

Silver Eagle encountered issues working alongside the site's lead tech team member, Yak. Silver Eagle stated that Yak's unwillingness to trust new team members or third-party services in operating FA made it nearly impossible for a new developer to get started. Dragoneer agreed to a full rewrite of the FurAffinity application, the latest of many such attempts to rebuild the FA web application. The project was code named "Daedalus" and work began in early November, 2015.

In return for his time spent working on the web site, Dragoneer indicated on multiple occasions that FA, thanks to its recent acquisition by IMVU, could compensate Silver Eagle for his work on the site. Despite this, by late January 2016 no payment had been supplied for any work. On January 26, after e-mailing IMVU and hearing that (contrary to Dragoneer's claims) no contract existed in his name, Silver Eagle published a video titled "The ClusterFur" describing his experience inside FurAffinity and concern about his non-payment. The video sparked a firestorm of criticism towards FurAffinity and IMVU, with many commenters insisting that legal action be pursued against the company; Silver Eagle refused, opting to speak directly with IMVU representatives about the issue. Two days later, on January 28, Silver Eagle posted an update video in which he describes IMVU's quick resolution of the payment issue. Fearing further public backlash, IMVU had acted quickly to begin ACH transfers of the agreed-upon compensation. Silver Eagle announced on Twitter that the funds had been received the following Monday.

As the controversy over his compensation brewed, Silver Eagle chose to release "FAOpen", a repository containing the Daedalus rewrite project that he had been working on since early November, to the public on GitHub. The new project had been licensed under the Apache 2.0 open-source software license and was based heavily on Silver Eagle's previous PVLive codebase.

During the dispute over payment for his time at FA, Silver Eagle stopped working with the organization entirely.

Fearing his FA rewrite code would remain unused and abandoned, Silver Eagle forked his FAOpen repository and completed the basic implementation steps needed to operate the site as a standalone entity. He rebranded the entire site, removing FurAffinity's name and graphics and replacing them with a new name, "FurryDigital" (based on the site's domain name, furry.digital). Nevertheless, as the project was based on the FAOpen codebase, the site's user interface bore a strong resemblance to FA's, and some static page content (such as the Terms of Service and Code of Conduct) were left unchanged from the FAOpen code. He launched the new FurryDigital web site into an "early alpha" on February 15, 2016, releasing the code to GitHub alongside the project's launch.

On Friday, February 19 (four days after the site's launch), Silver Eagle was contacted by an IMVU Vice President, who informed him that the company took issue with the resemblance of the site's UI to FurAffinity's beta style, and the direct use of the FA terms and conditions, suggesting that legal may be contacting him as soon as the following Monday. Citing the legal threats and a lack of clear support from the furry public and his developer peers, Silver Eagle closed down FurryDigital and removed both its codebase and the "FAOpen" repository from the web.

After shutting down FurryDigital and removing the code from the web, Silver Eagle repeatedly contacted IMVU requesting assurances that no further legal action would be taken. They did not directly respond to his requests, but instead FurAffinity permabanned his account, citing "plagiarism and theft of FurAffinity assets".

Believing the tone of the letter to be indicative of a lawyer assisting Dragoneer (and thus pending litigation), Silver Eagle panicked and became acutely suicidal. After considering attempting suicide that evening, he instead drove himself to a local emergency room and was hospitalized briefly. IMVU declined to pursue further legal action, considering the issue resolved with the site's removal. FurAffinity continues to actively censor any commentary on their own web site about the situation with Silver Eagle, much as they do with other controversial figures associated with their web site.

Between the incidents with Ponyville Live and FurAffinity, Silver Eagle has withdrawn from working directly on web developer projects in either fandom. He continues to be an active member of developer communities in both fandoms.