Silnat Silvia Natalia Moguilner was born in 1985 May 21 in Buenos Aires, Argentina but his parents want to note her with the day she has an entry to their lives the 24. She is adopted child with a fresh air of not caring too much for saying it. In fact she told she fell bless to have the family she has a complicated life, really hard but quite enjoyable. She lives with her son and mom now in Montevideo, Uruguay now. In 2005 started graphic designer and later she became furry artist

Silnat early concept
When she join FurAffinity with a new addition of friends and artists her fursona took to an anthropomorphic lioness form recently she add a new hair style a turquoise tuft. 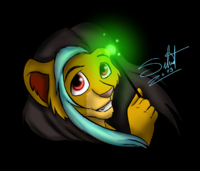 (This is just a draft because i recently had an interview with her and i find her life amazing and worthy to write.It's a note to myself to organize all my drafts and notes.)

Start of a long journey

Silnat's first steps into the furry fandom was in The Lion King Fan Art Archive, her first name as she can remember was Silnat 19 "I can't change my name every year it passes by *giggles* so i conserve the name and add Princess of love because i love every living creature in this world" she explain so that was her first gallery online Silnat-Princess of love was active between 2004 to 2007[1]

There she create a relation with another artist that recommend her Deviant Art TLKFAA has strict rules you can only submit some sort of art that rule make Silnat's art monotonous an started to feel bored so she gives a chance http://silnat.deviantart.com/ That open a new window not only now she can draw lions, fan art, things that create randomly now all can be there, also she started new relations with other artist in 2006 there was another start... the furry start.

Silnat is a multifandom person. Her first influence is more Disney or Warner.bros occidental stuff but she also love anime, manga and even fiction series like Doctor Who. Some illustrations you can see recently is My Little Pony stuff too. Rapidly when she go through fandoms try to find a way to illustrate in her own vision making unique and totally unexpected artist. Experts in Montevideo Comics[2] qualificate her style truly occidental now that she has a category she's digging on that.