Silent Sillies is a webcomic set in a silent black and white cartoon. The comic consists of anthropomorphic funny animals similar to Felix the Cat and Mickey Mouse.

Silent Sillies started out as a 6 panel Sunday comic strip from 2012 to 2016. In 2014 the characters were featured in a Funny Fantasy story line that was inspired by The Hobbit.

In 2015, a bonus 3 panel color, talking comic was created called Silent Sillies Speaks that lasted for 1 year. Then in 2016 a second bonus comic called Mavericks and Mummies that consisted of 56 strips.

Starting in 2017 a new storyline started called The New Nimbus Adventures which are updated on Thursday and Sundays, and also a bonus 1 panel comic strip called Silent Sillies Thoughts is updated on Tuesday. The New Nimbus story was inspired by classic adventure stories like Alice's Adventures in Wonderland and The Wonderful Wizard of Oz.

To promote the 2017 storyline, a video game adaptation of the comic was released on pithekos.com.[1] 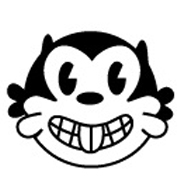