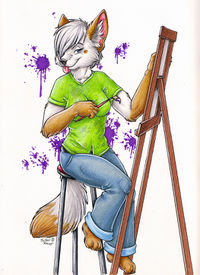 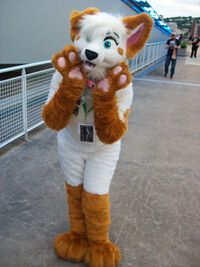 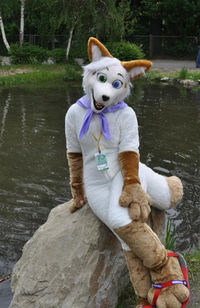 Ravyn's fursona, created in 2003, is a white folf (or arctic foxwolf),[2] the hybrid between an arctic fox and a timber wolf. She has light brown paws, ears, and tail, and heart-shaped pink pawpads. Her eyes are mismatched (the left is blue and the right is green) and there is a characteristic brown spot by the corner of each eye. In 2012 the character was slightly redesigned to include a floppy right ear, a light grey saddle on the upper back, and an additional brown spot on the left elbow.[3] Originally Silent Ravyn's fursuit was built by herself, but in 2013 she commissioned Don't Hug Cacti to build her a new one.[4]

Ravyn creates both cartoon and realistic art in various media, depicting both non-anthro and anthropomorphic characters. She specializes in traditional media, primarily watercolor paint, colored pencil and marker. Her fursuits are made under the name "LittleFangs Studio".[5]

Ravyn has been attending furry conventions since Anthrocon 2007, and has now been to several conventions on 3 continents, including Further Confusion, VancouFur, Eurofurence, FurDU and more. She generally has a table in the Dealer's Den and often displays original works in the Art Show as well.