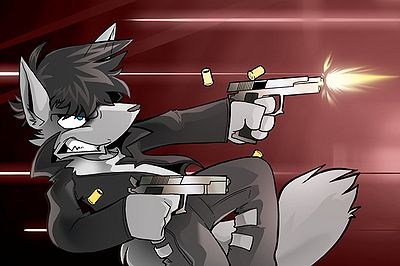 Tarek Coyote as depicted by Scott Ramsoomair
Kyle "SilentCoyote" Harrison is a Multimedia Producer and Editor from British Columbia, Canada. He adopts an anthro Coyote fursona of a nearly all Grey fur coat, a messy spiky night-black hairstyle, and usually dons a black jacket or overcoat, a white or blue t-shirt, and dark grey trackpants. His fursonas profession is a Hitman, and his name is "Tarek Coyote"

Kyles gone through many internet aliases over time within the fandom,

Though his friends just call him "DV"

At press time he refers to two aliases at once. "Tarek Coyote" comes into play as his regular alias, attending meets, forums, videos, and various social networks. The alias "DJKoyote" comes into play with anything audio he has a hand in producing. Whether its Editing, Hosting Podcasts, or providing a hand in a song, this is his alias of choice.

The problem with the name 'SilentCoyote' during some sort of recording is that im not Silent, in fact im quite the opposite. Plus it doesn't flow well when you say it out loud, so adopting the moniker DJKoyote during these times only seems appropriate. I cant run around just calling myself Coyote or Yote, thats already claimed by somebody else" ~Kyle 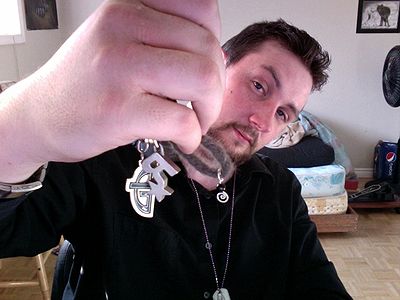 Kyle showing off his keychain attachments
Kyle runs his business "Black Jaguar Studios" with a desire to create entertainment of all kinds with an appeal to Furry and Standard Entertainment Appreciator (average joe) alike. From Audio to Video to Games, no stone is to be left unturned.

He currently produces AnthroMedia, a podcast on the AnthroPodcast syndication lineup alongside other podcasts overseen by Flain Falcon. Lately he's been vigorously learning video techniques to build up his competency with video production, and hopes one day to be a professional Editor or Producer.

Professional Jobs in the past have included a 3 year long lasting career in the eLearning Industry with PureSafety Inc. It is here that he was a Flash Programmer for creating Interactive Slides and Tutorials, as well as Production Tools Engineering. He is currently working with a few friends for a Website Firm with a special focus on PHP and Database Design.