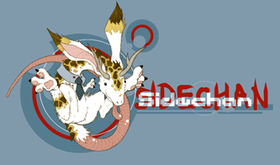 Sidechan was an image board replacement for Lulz.net. Its existence was brought about after Arcturus and cho0b had a disagreement concerning the former board.

With the exception of the new name, logo, ownership change, and front page disclaimer, Sidechan was virtually identical in both policies and content to Lulz, preferring a hands-off self-regulated feel, with as little moderator action as possible (in contrast with Fchan, which employs heavy protection of the Do Not Post list and anti-trolling/anti-flaming protection via the moderation team).

On May 19, 2006 [citation needed] Sidechan.net was relocated overseas to a German hosting service.[1][2] However, this may result in Sidechan violating German law which does not allow access to pornographic/indecent material without proper age verification.[3][4][5]

On January 7th, 2007, Sidechan was hacked by someone posting by the name "jihad", and all of the boards were wiped clean of their content, with an advertisement for lulz.net popping up on /furi/ before the entire site went down completely. Since that time, Cho0b has taken some responsibility for the attack at Crush! Yiff! Destroy!, and various other places.

The site was not returned to functionality until January 10th, 2007, because the entirety of the site's administration was on vacation during the attack, and did not have access to computers at that time. The current incarnation of the site was not fully operational at that time, as the administration was using the opportunity to start the site anew to test some added functionality.

As of January 2007, Sidechan is permanently offline. All personnel and assets were moved to their new image board, e621.