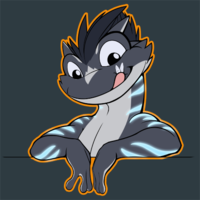 Shiuk (born August 12, 1987), also known as Shiuk Salamander, is a gay furry artist whose fursona is a salamander. He is one of the top 20 most popular users on Fur Affinity, according to FA Rank.[1] He has attended various cons, such as RainFurrest 2009 (at which he was also involved in a panel)[2] and Further Confusion 2010.[3] He was born in Texas, and as of 2010 is living in Nevada.

Shiuk is a digital artist who has been posting drawings on the internet for around eight years.[4]

His main body of work is his involvement with the furry magazine, Softpaw. His contributions have been in the form of comics in separate issues. They are:

He created the covers for three of Andres Cyanni Halden's novels, specifically "Within Hallowed Walls", "A Single Quavering Note", and "Beyond Hallowed Walls".