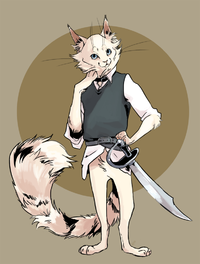 Shironeko Whitepaws (born 1989) is a furry from Germany, living in Spain. His fursona is a white Turkish Angora cat. He is primarily a writer but also an artist, and has attended some local furmeets as well as Eurofurence 17. He was the administrator of the social network Furritos aimed at Spanish-speaking furries, which once had some 400 members but is defunct as of 2012.

Shironeko is an avid fan of languages and natively speaks Spanish, Catalan and German, also speaks English and Dutch fluently, and is in the process of learning Esperanto and Swedish.