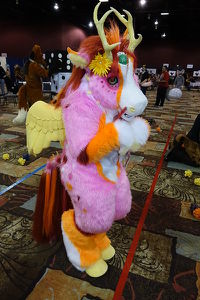 Shinopa Thyme (born April 8)[1] is a fursuiter who lives in the United States.[1] She is a writer in genres such as horror, fantasy, and sci-fi.

Shinopa has had an interest in anthropomorphic animals all her life, and joined the furry fandom in 2012. She has been active in the community since 2014, and since then has attended over 20 conventions.

She also owns 8 other fursuits, including 7 fullsuits and a partial.

Boomer the Kangaroo, from That's Furred Up,

Jesse the Nyala, from Beast Horizons,

Seafoam the Seadragon, made by herself,

Lewis the Kaiju, made by herself,

Mundoo the boar hybrid, made by herself and Beastcub, who made the head

Shinopa is looking to start work in making premades, as well as experiment with new techniques.

A subset of the conventions which Shinopa has attended is as follows: