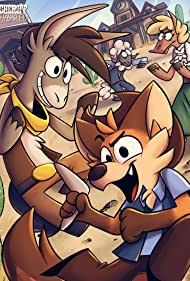 Sheriff Hayseed is a series of animated shorts created by Piemations, which follows the adventures of the eponymous Sheriff Hayseed and his deputy Shawn as they defend the town of Troughwater—a frontier town largely populated by ungulates—from criminals.

As of January 2022, two episodes of Sheriff Hayseed have been released, with a third currently in production. The first two episodes were written, storyboarded and animated by Piemations alone, whilst future episodes have a team of animators working on them.[1]

Sheriff Todd Hayseed
A fox who is the enthusiastic but woefully under-qualified sheriff of Troughwater, having been hired despite taking creative liberties with his resumé. Todd utilises a boomerang when attempting to fight or capture criminals, which is usually ineffective. Voiced by Michael "Eloediel" Nocturnel.
Deputy Shawn Burrowitz
A donkey and deputy sheriff of Troughwater. He was the acting sheriff prior to Todd being hired and is generally much more competent at his job, but was passed over for the role due to his inability to hold a gun. Voiced by Blake "ShadyVox" Swift.
Mayor Josanne "Joy" Hackney
A horse, the stern mayor of Troughwater and Todd and Shawn's boss. She is a skilled fighter and a veteran of an unnamed war. Voiced by Anna Chloe Moorey.
Lloyd Herdwick
A sheep who works as Mayor Joy's assistant. Voiced by Blake "ShadyVox" Swift.
Boomstick
A naked mole-rat who makes heavy use of dynamite when committing crimes. Voiced by Damien Lee.
The Snake Boys
A criminal gang of snakes. Voiced by Blake "ShadyVox" Swift.
Hick Huckman
A horse and citizen of Troughwater who is frequently injured during Todd and Shawn's adventures. Voiced by Robin "Xycron" Nelson.

ShadyVox, who voices Shawn, is responsible for the music production and has released several videos where he performs music as the character.