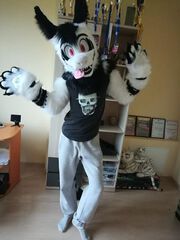 Shelby, also known as Shelby The Alpha (real name Paul; born July 22, 2002), is a fursuiter and YouTuber originally from Lithuania.

He loves being in nature. His hobby is collecting animal plushies. His favorite foods are tortillas, pizza, coffee, and chocolate cake. His favorite indoor activities are working in garage, gaming, writing, drawing, designing and drawing blueprints for cars. His favorite outdoor activity is playing airsoft, playing paintball, and cycling.

In 2014, Shelby discovered the fandom through furry arts on Deviantart.

Shelby's fursona species is a wolf/demon hybrid. He has black [[claw]s, his body and tail are colored black and white fur with stripes, and his facial features contain red eyes, a white nose, and two black horns.

What prompted him to come out the idea with his fursona was he loves the personality of being wolf and demon, and he wanted to give it a serious personality, not like a violent character. His fursona name was inspired by his favorite classic car, a Ford Mustang Shelby, or as people called it, Eleanor.

His fursuit was made in 2019. The head base was made in Ukraine by fursuit head base maker Maxim Berezhnoy (Man Bases). Other fursuit parts were made by Russian fursuit maker Studio Master Twixx (known as wild.liar.deer on Instagram).

On October 20, 2019, he uploaded his first Large Gipsy fox plush unboxing by ShelbyTheAlpha video. He is planned to do vlogs and reviews of plushies, and also fursuit related videos, mostly from fursuiting cons and other fun things.