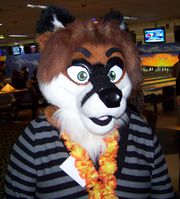 Shay Duval, also known as Rhari (born November 9, 1988),[1] is a furry artist and stay-at-home mother. Her RL daughter's fur name is Barra, and they live in British Columbia, Canada.[2]

Shay has been drawing adorably cute critters since the age of six[2] (her first creations were horse people), and her work has evolved steadily since then. She attended art programs in high schools along the way, as well as the University of the Fraser Valley. She describes her work as "anime meets Disney meets Don Bluth".[2]

Shayi has been involved with the furry fandom since 2002.[2] Rhari was on the staff of RainFurrest 2008, when she was the conbook editor, art show helper and flyer artist. She was staff and attended RainFurrest 2009. In 2010 Rhari joined the parent organization RAIn as a member at large on their board of directors.

Her fursona is named Rhari.

Shayi's daughter, Barra, is illustrated as a Lynx and Red Fox hybrid with pigtails, lynx ears, and a long tail ending in a fox tip.