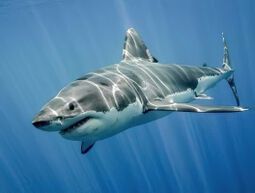 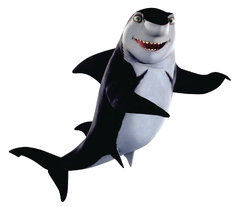 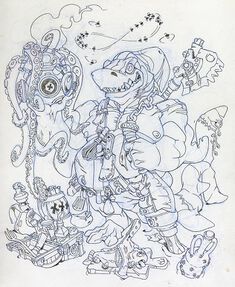 Sharks, also known as selachimorphs, are a group of elasmobranch fish characterized by a cartilaginous skeleton, five to seven gill slits on the sides of the head, and pectoral fins that are not fused to the head.

Modern sharks are classified within the clade Selachimorpha (or Selachii) and are the sister group to the rays|Batoidea|rays. However, the term "shark" has also been (incorrectly) used to refer to extinct members of the subclass Elasmobranchii, which are technically outside the Selachimorpha clade. Notable examples of improper classification include Cladoselache, Xenacanthus, and various other members of the Chondrichthyes class like the holocephalid eugenedontidans.

Sharks are swift, strong, silent, and very well adapted to their lifestyle, remaining unchanged since the time of the dinosaurs. Shamanism attributes the shark with many fine qualities, including remorselessness and shapeshifting. They take the role of protector and savior. Sharks are gods of the sea and guardians of family, with the ability to move constantly, a connection to past knowledge, the ability to defend themselves, and to never be caught off guard.

Several shark species are apex predators, which are organisms that are at the top of their food chain.

Kamohoali'i was the king shark god of Oahu and the elder brother of Pele. Each island of Hawaii has its own shark god, and many families have personal shark guardians or Aumakuas

Unlike other species of Hammerhead, the Great Hammerhead is solitary and dangerous to humans. They feed on rays, smaller sharks, and many species of bony fish.

Great Hammerhead Shark is one of the three hammerhead shark species suggested for Rokea characters (weresharks of World of Darkness RPG). They get a bonus on sight-based rolls and Social rolls with other Rokea (the system grants this bonus to all hammerhead species).