He maintains having bisexual fursonas although he is gay. 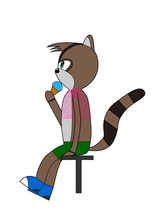 Shane's original fursona is a Tanuki who has abilities that rivals that of Sonic the Hedgehog.

Shane's original appearance featured blue shoes, green cargo shorts, and a spiked collar with matching wristbands. His appearance has slowly changed over time to include "front hair spikes" and a pink fishnet top that was "given" to him as a joke. 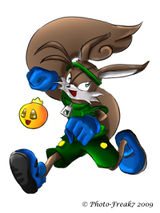 Shane's current fursona was originally known as "Shane," but is also known as 音のシェーン (Oto no Shane, Lit. "Shane of the Sound") and was created as a Klonoa fan character. However, because his name was constantly mistook as a reference to Naruto, he changed it to "Shane the Freestyler" after he discovered in the music video to the song Freestyler by Bombfunk MC's featured a time control element involving a MiniDisc player that Shane already planed for his character.

He is a Dream Traveler who originally hailed from the town of Melodania which is the musical hub for the world of Phantomile.

Shane can control the Sound Bullet with his ring and the help of Luepow, Shane's friend and one who summoned him to be the Second Traveler. Later into his adventures, he also gains the ability to use his ring under his own power as well as the ability to control time using his MP4TC, at which point he adopts the "Freestyler" name and takes a job at the Time Factory (from Blinx: The Time Sweeper) as the only non-feline employee in an attempt to use their resources to find his original home.

Shane's appearance shares similarities to Klonoa, his body is the same shape as well as his face, he has also been known to wear a green version of the infamous "zipper shirt." His ears are pointed somewhat like the scrapped redesign of Klonoa, his tail is at least twice the length of his body, and his fur colors match Shane the Raccoon-Dog.