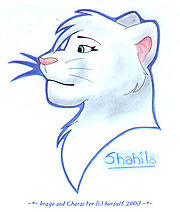 Shahila, as drawn by herself

Shahila is an artist from Argentina, South America. She has been a staff member and played several characters on a number of MUCKs, including Demi Haze MUCK, GotS MUCK, African Legends, and African Tails MUCK. She was one of the main (along with AudreyPuppy, Tilyn and Kawe) founders and the Head wizard of Sunrise MUCK. Her fursona is a white lioness.

Sofía García was born on 15th of February, 1986, in Buenos Aires, Argentina. During most of her childhood she showed great interest in animals and could often be found drawing them, her predilection always pointing towards big cats. This passion only grew stronger in 1994 with the release of The Lion King, a Walt Disney Pictures production. The impact the movie had on her was so strong that she was immediately motivated on improving her drawing skills. Around the age of fifteen she became involved in MUCKs (Role Playing Enviroments) where she created what would become her artistic name for years to come: Shahila. The first MUCK she joined was The Lion King themed, and her Role Playing skills evolved slowly but steadily as years went by, to the point great quality and creativity. The second MUCK she joined was known as African Tails MUCK, that lacked of the bustling activity of other places. With the support of many players of said game, they opened a brand new MUCK, Sunrise MUCK, where she took the Head Wizard position for several years.

Shahila joined several games and in many of them she was promoted to higher ranks:

Most of the time, Sofia joined Role Playing games as Shahila, her white lioness character, but she also created other popular characters known of their uniqueness. She had a thing for designing characters that stood out for their coloration. Xian, one of her most beloved and known character asides from Shahila, was described as a great golden lion with fiery red mane and teal-hued eyes. Here's a list of some of her characters and the games she played them at:

As Shahila went on from game to game, her level of creativity increased (inspired by her role playing activity) and she found herself interested in character design.

Xian
As listed above, during her years in these games, she created more than 30 different and unique characters (at the bottom of this article you can find a link to her Deviant Art account) with individual personalities and histories. She especially liked coming up with backgrounds and stories, especially big scale plots for her game, Sunrise MUCK. Also, she worked on some commissions for the United States and London when she was around seventeen. Nowadays, she uses her artistic talent mostly to design logos for dog sports. She created the logo for the Agility Championship for the Americas and the Caribbean (2008), and also designed an advertisement of an Agility Club for a magazine. 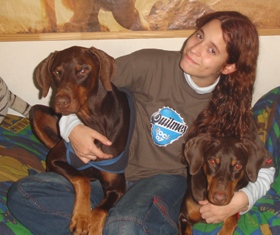 As it happens with everyone, Shahila soon finished high school and was welcomed with responsibilities that slowly became priorities over the games she had spent so many years playing at. By the end of the year 2006 she had to "pass the crown" of Head Wizard of Sunrise MUCK to her friends, AudreyPuppy, Tilyn and Afya. She started working in a trustworthy company of the Stock Market in order to pay for college, and right now is studying to become a Director of Animated Movies (both in 3D and 2D). In the last semester of 2007 she was awarded with a scholarship thanks to her outstanding marks. She finished that semester with an overall promedy of 9.6 (from 1 to 10). A new addition to the family was welcomed too; Mystic, a female red dobe, was brought home around the end of 2006. Later on she was diagnosed with a health issue that prevented the new dog from training Agility, but the family had already fallen in love with Mist thanks to her sweet, loveable nature. 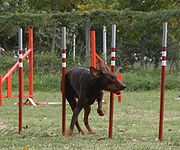 Although Shahila never truly quit drawing, she hardly updates her accounts with new art now a days. Her new passion (and distraction from art) was found in a Dog Sport: Agility. She started taking classes in 2006 with her 3 years old, red Doberman Pinscher, Shadow. The path was rocky at first, but all the way through 2007 she started training with other Agility clubs that taught her all the knowledge they could.

Shadow soaring and Sophia
Nowadays she trains at only in a club called "La Jauría", where she feels at home. Shadow participated in many competitions during 2007 and 2008, his main attribute being his speed that isn't often seen in such large breeds. She's travelled for many competitions, and in March (2008) she had the opportunity to participate in the Sudamerican Tournament organized this time in Buenos Aires, Argentina (Sudamerican Tournaments are very important as many countries often assist), and managed to get an excellent 4th place in Jumping. She assisted to all the seminars and classes she could access. The first seminar was instructed by Mr. Kenneth Tatsch, President of the United States Dog Agility Association. The following year she participated in Silvina Bruera's seminar.