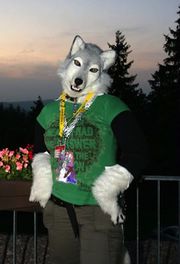 Shadster, also known as Shadow and Senkà Lupita (born June 23, 1987, in north-east London, UK), is an artist and fursuiter.

Most of the artwork Eurofurence's Furball Run were designed and created by Shadster and the convention's co-founders. Shadster is a therian, believing in the idea that, in whole or partly, possesses a wolf-like soul or spirit.

Shadster's fursona is a European wolf whose full name is Senkà Lupita, but prefers to be called by the nicknames Shads or shadster.

Shadster has always been interested in cosplay, and owns a partial fursuit made by Qarrezel of Clockwork Creature Studio in April, 2008.

Shadster first uploaded artwork online in 2005 to The Lion King Fan-Art Archive. Since then, the media uploaded to additional online galleries has expanded its subject matter from The Lion King fan-art to fully detailed animals, fantasy, and anthro art.