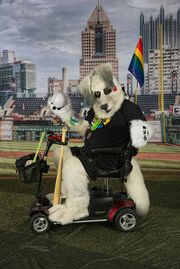 Shadowbandit, sometimes shortened to Bandit (born June 25, 1959 - died February 14, 2020) was a furry fan, fursuiter, and graymuzzle from Altoona, Pennsylvania. [1] Shadowbandit was one of the individuals featured in the 2016 Fursonas documentary. On February 14, 2020 Shadowbandit passed away due to complications from diabetes.

Shadowbandit was active in the furry fandom since discovering it on October 6, 2011. He helped to found and organize the 2018 iteration of the Altoona Furbowl in Altoona, Pennsylvania. His fursona and fursuit were based on a deceased pet of his, which was also named Bandit.