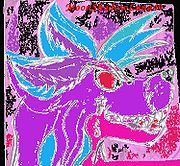 Bill J. Clark, also known as ShadoWolffess, was born on March 3, 1956. He is bisexual, enjoys fursuits, and is a plushophile. His RP character is a buxom female Werefox Vixen ShadoWolffess. Her coloration is emerald green with black socks and an iridescent purple and green tail. His artist signature is MoonShadowLuna49. He uses other aliases online, including Nickelback Wolf, werefox49, biltfoxxx44D, Xagnarrbgwlf, and Adurrah Wereverine.

He admits that yiffy cub art is his passion. He is always open for commissions, and will offer free samples, conbadges, and fursuit portraits.

Shadowolffess' fursuit, which has been named Adurrah Wereverine, is a werewolverine hermaphrodite. Shi stands at 6'2" and weighs roughly 160lbs. Hir fur is dark brown with a black mask. Hir breasts and belly are golden-furred. Shi has a black 'sock' on each paw. A wide black stripe runs down hir back to hir black, bushy tail.

Shi has regenerative powers, and could be considered immortal.[1]

This suit has been worn at Morphicon, Anthrocon, and Mephit Furmeet.

His new fursuit, an emerald-green shaggy grizzly bear/werevixen with a purple tail, will debut at Morphicon. It will have black 'socks' as well as a black tail-tip.

He was banned from Mephit FurMeet for proposing the sexual use of a fellow fur, Moonstone Wind's, handicap assistance dog while in a secluded elevator with her. He has been known to make extremely inappropriate sexual comments to both furs and non-furs in public. He often Ghosts conventions, sleeping in the lobby instead of paying for a room.