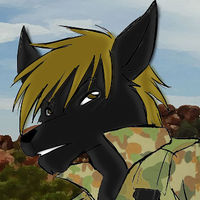 Sgt. Andrews (born July 11, 1991) is an Australian furry whose fursona is a Jackal-Doberman hybrid.

While looking like a typical jackal from afar, up close Sgt. Andrews better resembles a mix of Doberman and Jackal. He is mostly black with golden fur on his chest. Ninety percent of the time he is seen wearing some sort of DPCU or (in certain situations, such as being in Iraq) DPDU, with either a proper uniform top or a black tank top. His eyes are hazel in colour.

A majority of the drawings of Sgt. Andrews are by toraneko, as sketches or lineart, but are quite often coloured and edited by Sgt. Andrews himself.

Sgt. Andrews discovered the furry fandom through another fur in 2010, and eventually joined the Fur Affinity and SA Furs communities. He also often visits other furry sites, such as the Fur Affinity Forums and Furstralia.

As of April, 2010, he is stationed at Murray Bridge, South Australia, but often travels to Adelaide for fur meets.

In a not-too-distant fictional future, during a period of econonic trouble and lack of resources, the Australian Government looked towards its history as spearheads of major conflicts, using this to their financial advantage by turning the soldiers of the military into mercenaries. This solved the economic problems and built the country into one of the most powerful nations during the crisis, advancing education, health care, defence, and, mostly, scientific research. Often, secret military research was conducted in the middle of the outback where no man would dare to tread, creating new weapons, medicine, and, most importantly, a new type of soldier.

The first soldier was created accidentally. Coded Subject 010 (but after a few years named John Andrews), he was raised in the outback in searing heat until he was twelve years old, when the government found how effective he was at surviving trauma, extreme temperatures, and injuries. Subject 010 was able to carry twenty times more than any human soldier, could run faster and longer, and was able to withstand mental and physical training. Subject 010 was then transferred to the newly established training facility for hybrid soldiers, just outside Alice Springs.

After years of different sorts of training, including multiple weaponry courses, driving, piloting, and other courses given by special forces, John Andrews enrolled in the Australian Defence Force, Australian Army at the age of nineteen. Serving in the fictional 11Royal Australian Regiment (a regiment based on the Australian SASR and the 2nd Commando Regiment), Andrews often travelled overseas with other anthropomorphic soldiers. He also has accomplices in other fictional regiments, including the 10RAR Mechanised Unit (based on the 7RAR regiment), the 12RAR Armoured Division (based on the 1st Armoured Regiment), the 13RAR Cavalry (based on the 6RAR regiment) and others, including companies from other nations that employ anthros in their services.

Andrews quite often attempts to attend local coffee meets, movie meets, birthdays, and Australian conventions. He usually stands out in a crowd, due to wearing Auscam or DPCU to represent his fursona and his country.

Andrews has an interest in history, particularly Australian history and World War II. Having an interest in joining the Military himself, he also studies Australian weaponry and military equipment, both past and present, and making himself familiar with modern Australian weapons like the F88 Austeyr and the F89 Minimi. He prides himself in having a family with a military tradition.

With his interest of the military, he also enjoys video games such as Battlefield, Command & Conquer and other various games. Though under a different Alias he quite often likes playing games to escape real life stress and drama, but also loves to go out to the local pub and have a few drinks with his mates. Music is also a major part of his life.