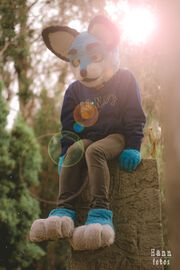 Seth The Fennec, also known as Soy Seth, Digital Fennec, and デックスFOX, previously as supernovaOwO, is a musician, fursuiter, fursuit maker, and YouTuber originally from Quilpué, Chile.[1] Since May 2018 he is on a relationship with the digital artist and fursuiter Ticktock

Seth joined the furry fandom in 2014, although he started his activity in 2016 by creating his fursona, and manufacturing a fursuit in 2017.

Seth created his fursona, fennec fox, with the help of Raymond, a digital artist who kept contact with Seth in Furry Amino. His coloring is light blue, with white fur in his torso, snout, paws and the tip of the tail, and black ears from outside and white inside them. His eyes are green.

Seth started manufacturing his fursuit in March 2017 and finished it on August 19, 2017, where he debuted it at FanValpo, an anime expo in Valparaíso, Chile. Until today, he still owns that fursuit, which appears in his YouTube channel. He went known when he made a viral video of himself in his school that it has been viral in a few weeks in Latin America, reaching 100k views in seven months.