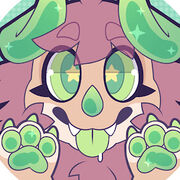 Seel was originally born on the East Coast of the United States, but later emigrated to Tokyo, Japan. Seel's favorite animals are insects.

They have other fursonas such as Pom, Adzuki, Clair, Joji, Coral, Grimbelle, Mozzarella, Gumbo, Jubilee.

Seel has two fursuits; a full suit by MochiriWorks, and a partial by Macaroni Market.

They use Firealalpaca for animation and PaintToolSai for general artwork. Seel usually edits their art/animation in Adobe Premiere.

They are the creator of the furry webcomic Seel Peel.