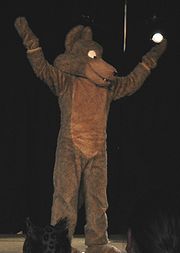 Scruff E Coyote is a coyote and a fursuit performer.

He is involved in organizations such as Critters by the Bay and Give Bears the World.

He alternates between his real life duties as a National Park ranger and his job as a Six-Flags employee, and spending time enjoying furry events when he can.