Scotiacon 2011 was the first rendition of the British convention Scotiacon, taking place from July 15-17, 2011, at the Ramada Jarvis hotel in Inverness. The theme was Scotland and Scottish culture, and the guests of honour were composer Fox Amoore and fursuit builder Fatkraken.[1] 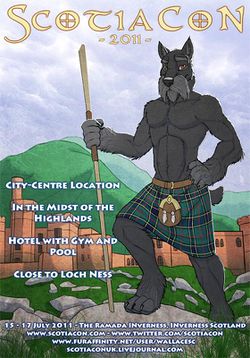 Co-chairman Smirnoff announced the relaunch of Scotiacon on July 15, 2010, indicating that registration would be opening soon.[2]Registration finally opened on November 1, 2010[2][3], with two available ticket types - Basic (attendance and the conbook) for £65 and Sponsor (attendance, conbook, t-shirt and a print) for £95.[4] The first official ticket was auctioned by ThrashWolf at RBW 2009's charity auction for the sum of £90.

Prices did not include accommodation, allowing attendees to choose whichever hotels in the area they wanted, although a special discount rate was arranged with the Ramada Jarvis hotel for those wishing to avail themselves of the facilities.

When registration closed on June 30, 2011, approximately 50 furs were registered to attend.[5]

A teaser trailer for the con was released on the Scotiacon website in June 2010 [6], with the full-length trailer being released on November 5, 2010[7]. An outtakes/blooper video from the trailer was released in April 2011.[8]

An unofficial pre-con Friday afternoon/evening event extended the weekend for attendees coming from further afield who wanted to make more use of their trip. The first events were officially announced in the February 2011 news post, and eventually included a science talk, charades, a Highland Fur Games (won by Awkore), the "Furry-vision Song Contest" (a Eurovision Song Contest style event) hosted by Smirnoff and Pinky, and "Eat Scotland" (a chance to sample Scottish delicacies such as Cullen Skink (a type of fish soup), haggis, and deep fried Mars bars), as well as the usual fursuit walk, dances and auctions.[9]

The auction took place on Saturday evening, with a staff and Guests of Honour-signed limited edition bottle of 30-year old whiskey, donated by The Famous Grouse, as the most expensive item being sold for £450.[9]