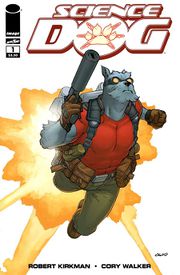 Science Dog is an anthropomorphic dog adventurer who has appeared in every 25th issue of Invincible comic, published by Image Comics.

Originally an average dog, an accident of science causes him to evolve millions and millions of years ahead to become the smartest life form on the face of the planet and the greatest science adventurer the world has ever seen, along with a human scientist named Walter who becomes his arch nemesis[2].