This article is about the person. Schism is also a story in the Lapism universe. 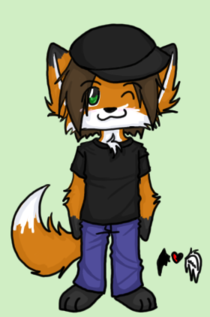 A picture done for Schism by Kaitlyn Thylacine.

Schism H. Swiftpaw, also known as Skizzy (born 1995), has been in the furry fandom since around 2006 and lives in Norfolk County, Massachusetts, USA. His character is an anthropomorphic red fox. Schism is an amateur furry artist, and is still[when?] trying to learn. He can be found frequenting the website Furry Teens, as well as Fur Affinity and Furspace.

Schism is a quirky red fox. He has black fur on the tips of his ears, and paws. He has white fur on his muzzle, neck, and chest. He is always wearing a TOOL t-shirt, baseball cap, jeans, usually no shoes, but occasionally sandals. Schism has also been known to have some evil tendencies, like harassing kids on Club Penguin. But most of the time, he just loves to be around his friends, and his mate, Foxxeh.

In real life, Schism is Sean. He loves to play drums, Team Fortress 2, Rockband 2, baseball, and listen to TOOL, Soundgarden and Dream Theater. He can be found on Xbox Live all day during the summer, and he loves to play with other furries.