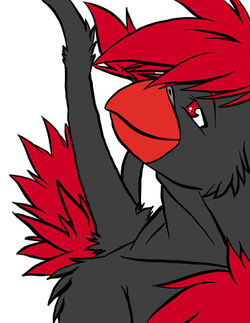 Scani (born 1988, pronounced SKAH-nee) is a furry from Canada. His furry persona is a cardinal gryphon.

He formerly used the full name Scani Forte (and before that, Scani Lupena) in the fandom and on Second Life, but now prefers to simply use the first name. 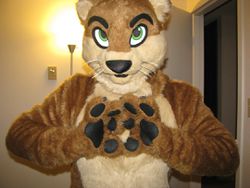 Scani joined the fandom in early 2004. He originally assumed personas such as a black wolf and a white winged fox before assuming the gryphon character full-time in the middle of 2006.

In 2013, he introduced a new fursuit, Tautoru, an otter built by Don't Hug Cacti.

In early 2009, Scani joined the convention committee of Furnal Equinox, the first hotel-based furry convention to take place in the Toronto area. He served as the head of publicity and website maintainer for the convention, as well as their business advisor, before becoming convention chair for the 2015 event.[1]

In addition to his involvement with FE, he has attended the following conventions as of July 2015:[2]