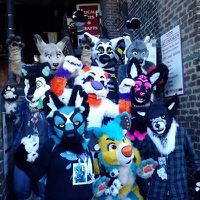 Savannimals, a portmanteau consisting of the city of Savannah, GA and "animals", referring to the group being run by, and including, furries, is a regional furry group based in Savannah, GA that includes other cities in Georgia and South Carolina due to their proximity.

After the majority of members involved in Savannah Furs moved away or became less active, the Southern Comfurt group was formed. Events were small and infrequent, often including get-togethers at member's houses or apartments, or furmeets at the Oglethorpe Mall. The name Savannimals was coined by Toraie and a friend in 2011 after core members of Southern Comfurt moved away. However, it did not catch on until 2012, after a particularly well-attended River Street Fur Meet event.

The name Savannimals has received similar positive and negative feedback in that it is "punny," yet conveys the playful attitude of fursuiters and casual atmosphere the events provide.

Statesboro, Hinesville/Ft. Stewart, and Hardeeville, SC all have members of Savannimals, and events have been held in many nearby locations. Some events are held in coordination with SCADFurs, but these are limited to off-campus events due to SCADFurs' status as a student organization/club. The group's events used to be posted and updated on FurAffinity, but due to the site's waning popularity, events have largely been moved to the group's Facebook page and their Telegram.

There has since been constant activities, mainly organized by Toraie, ranging from small home parties to fursuit walks on River Street. These fursuit walks are often held on the First Saturday crafts festival downtown and are well-attended due to the proximity to SCAD campus and ease of set-up. Events are held monthly year-round but fursuiting events are generally only held from November to May because of the hot, humid summer weather.

Savannimals organizes, and are known for hosting, a variety of meets, not limited to just bowling or dinner. Often, they arrange carpools for those without transportation or hold events in a central location so those walking are able to attend. Screamin' Mimi's, a New Jersey-style pizza and subs restaurant, has been the host of many Savannimals events (particularly the River Street Fur Meet) since 2010, because of its free parking, outside seating, and affordable prices. 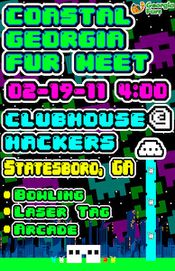 Poster for a Savannimals event, poster designed by Xepher.