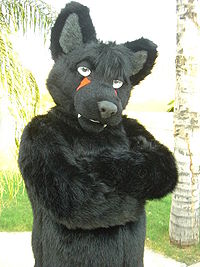 Sasho owns a fursuit which is based on his fursona. The fursuit was created by Don't Hug Cacti Studios and made its debut at Furry Weekend Atlanta 2009.

Sasho worked in the Aviation Industry from 2007 to 2011, and since 2011 has worked in the Hospitality Industry. As of 2017, he works for Amtrak. He is cousin of Yukaige Fox and uncle to River.