Sanlich Conmuerte (also known Spinal22) is a French furry artist who creates traditionnal art and he has drawn since may 2005. His characters display mainly scalie, specially dragon, styles and dispositions. He is also fond of skeletal-like characters.

Spinal22 love videogames (his nickname is came from the skeleton character of the famous game Killer instinct), an oldgamer (He has got a videogames collection too) and a big fan of Nintendo.

Spinal22 has got a mixed up style which combine fantasy style and manga style. His drawings are exlusively in a traditionnal media. He's working currently in a webcomic. 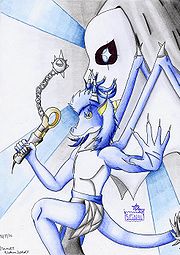 His fursona is an blue anthro dragon specialized in the necromancy which has been creating in may 2005. He has got hair and goatees, and he's wearing headbands in his horns and a special slighty chainmail on his belt. He travels all over the world with his old friend Cthulume, the crazy skeleton, to fight and destroy corrupted wizards and warriors.