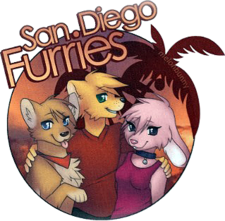 The San Diego Furries, or SDF, is a social group for furries in the vicinity of San Diego, California, USA, founded on January 3, 2012 by Halon, Raket, and Chance the Dragon.

They plan and offer such events as a parties and furmeets,[1] and keep their members abreast of any furry related news on the Souther California area via their various websites.

The current organizers of the San Diego Furries are Chance the Dragon and Fenrisulfr a.k.a Fenrir, who regularly run monthly furry events during the first and third Saturday of each month, unless otherwise moved due to weather or other furry related events of which the organizers will be attending, such as BLFC or the FurBQ. The duo operate out of their house, known as PairO'Dice, sometimes hosting after-parties with their close personal friends at the end of their meetups. The noteworthy meetups hosted by the San Diego Furries include the Local Monthly Furry Anthro Outing, otherwise abbreviated to LMFAO, at Admiral Baker Park in San Diego, and the Belmont Park meetup, held at Bonita Cove in Mission Bay.

The San Diego Furries originally held a meetup known as LMFAO at Lake Murray in La Mesa, CA (known as the Lake Murray Furry Anthro Outing), but due to the overwhelming attendance held at the meets, sometimes in excess of 100 people, the park officials were eventually forced to ask the group to either take the steps required to obtain a permit to host their events, or to politely stop hosting events there. Unfortunately, due to the laws surrounding Lake Murray, and being a reservoir, there were some insurmountable financial goals to be met in order to obtain a permit, including needing to shuttle attendees into the park from an offsite parking lot, and the purchase of a minimum of 3 Porta-Potties, on top of all of the permit fees. The group has since decided to leave Lake Murray for a cheaper, and more hassle-free venue.

The organizational team of the San Diego Furries consist mainly of Chance the Dragon as the head of the organization, and his roommate and best friend, Fenrir. Chance runs the administrative portion of the group, working with the leaders of other groups across California and beyond who would like to feature the group in any outside publications or televised features, and coordinating the group's meetups. Fenrir runs the meetups themselves, acting as both a human resources representative, and rule enforcer (i.e bouncer) for the group if any trouble arises.

Despite being one of the most successful and active large furry social groups in California, the San Diego Furries operate almost all of their meetups on a paper thin budget, asking their members to donate via Patreon in order to fund their biggest event, the LMFAO. Otherwise, all of the events held by the San Diego Furries are free to attend by anyone. The group does however have a blacklist of banned individuals who were found doing illegal, or otherwise exhibiting socially unacceptable behavior. Both organizers update this list regularly, whenever complaints about unsavory individuals are brought to their attention. This has earned them acclaim from several members of their community for setting standards and weeding out otherwise dangerous behavior.