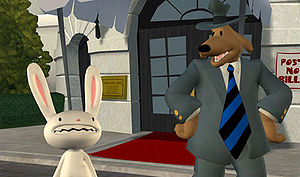 Sam and Max as they appear in the Telltale game

Sam & Max Season One is the first season in a series of episodic adventure games by Telltale Games. Six episodes were released as part of Season One, starting with Culture Shock in November 2006 and finishing with Light Side of the Moon in April 2007. A second season is currently[when?] underway.

Sam & Max are a crime fighting duo created by Steve Purcell, who co-wrote the stories in Season One. Originally the Sam & Max games were created by Lucasarts games who released Sam & Max Hit the Road in 1993. Lucasarts cancelled the followup game Sam & Max Freelance Police. Telltale games later obtained the game license and created their own episodic series of games. A number of staff at Telltale worked on the Lucasarts Sam & Max games.